If you work with coffee farming communities, or if you have an avid interest in coffee, by now you have coffee leaf rust, or “la roya,” which has caused significant losses to the coffee harvest in Central America.  Reports estimate a loss of 20% of the Central American crop this year due to the fungus, and predict a drop upwards of 40% next year.  States of emergency have already been declared in Guatemala, Honduras, and Costa Rica and Nicaragua and El Salvador do not seem far behind.
probably heard about the 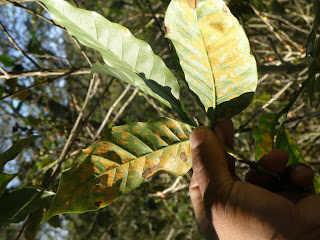 Coffee leaf rust represents a perilous loss of income for small-scale coffee farming families who are largely reliant on the income earned from coffee and struggle to meet their basic needs during much better times.  In February, the Sustainability and Coffee Departments at Green Mountain Coffee Roasters, Inc. (GMCR) teamed up to conduct a survey of our supply chain partners to learn about how rust was affecting producers in their network and to understand the household-level impacts of the rust epidemic.  In 111 survey responses, they learned about the extent of infection, common approaches to treat and prevent the fungus, and the toll that the outbreak is having on vulnerable families.  The coping strategies mentioned included pulling children out of school to save on school expenses, eating less expensive and nutritious foods, and migrating to urban centers where there may be more opportunities for a better life – real or perceived. Read a summary of the survey results here.

GMCR has invested significantly in projects to reduce the window of los meses flacos or “the thin months” of food insecurity. The pervasive opinion in Central America is that the thin months will be longer and more difficult during the next 2-3 years as a result of the coffee rust.  GMCR's food security focus predates this roya epidemic; they know their investments are helping build resiliency for shocks in the coffee system like coffee rust.  These interventions will become even more important as farmer’s primary livelihood is at risk, and will contribute to alleviating a humanitarian crisis.  While much of the coffee industry and producer networks will be focused on renovation as a response to rust, the Sustainability team at GMCR will continue to advocate for enhanced farm plans that include diversified income sources and food production to reduce over reliance on coffee and promote family food security when prices or production are low.